‘Stepping into politics was an extension of my activism’: Nithya Raman

Last month, Nithya Raman made the unthinkable possible. She became the first city council member to unseat an incumbent in Los Angeles. But before her historic win, Raman, 39, trained in urban planning and governance and has been a community leader both in India and the US.

Born in Thrissur, Raman left for the US with her family at the age of six. Later, she would live in Chennai (her husband’s family hails from Madurai and Tenkasi) and start the Transparent Chennai initiative. It empowers slum dwellers — by using maps and data — to access basic services like clean toilets and drinking water, and to find a voice in local governance.

In 2013, the Harvard University and MIT graduate moved to LA, and worked with the City Administrative Officer of Los Angeles. She found out that much of the city spending on homelessness, around $100 million, was used in arresting people than in services, outreach or safe housing. In 2017, she co-founded SELAH Neighborhood Homeless Coalition, to provide meals, clothing, healthcare, housing and employment support to the homeless.

She had heard stories of people having to move out of neighbourhoods because of high rentals and saw how the protests over the death of George Floyd in May marked the fault lines in police funding and brutality. It helped her shift the conversation on homelessness from it being a problem to providing the tools to help these people. As the former executive director of Time’s Up Entertainment, born out of the #MeToo movement, she also focused on equity and safety for women in Hollywood.

Her race to the primary and elections meant knocking on 80,000 doors in the 4th District, pretty much the centre of LA, with over 2,000 volunteers by her side. Unlike other corporate-funded campaigns, Raman chose to go to the people. She speaks about how she grew into a community advocate, her campaign in LA’s diverse neighbourhood and how the “outsider” tag helped her win. Excerpts:

How did issues of land rights and the homeless become your areas of interest?

I was in Delhi before the Commonwealth Games (2010) and had read about the Yamuna Pushta (embankment) evictions, where more than 100,000 people lost their homes. I began working with slum-based organisations, fighting evictions and asking for basic services. Seeing how the government decisions negatively impacted the lives and livelihoods of so many made me realise how important urban governance was. That pushed me to study urban planning.

What prompted the urban planner to contest elections and what has this journey meant?

I was so frustrated with my elected representatives and how little they were doing to address the city’s biggest issues — especially in a city like Los Angeles, where our local government has so much power and control. Finally, I decided to run myself. For me, stepping into politics was an extension of my activism. I am in this role because I want to be able to implement the changes that I have been fighting for as a community leader. I had to learn to communicate policy ideas which could be understood by voters, use tools like social media, videos and short public speeches. I even had to communicate with people who did not always agree with me and convince them to give me a chance. 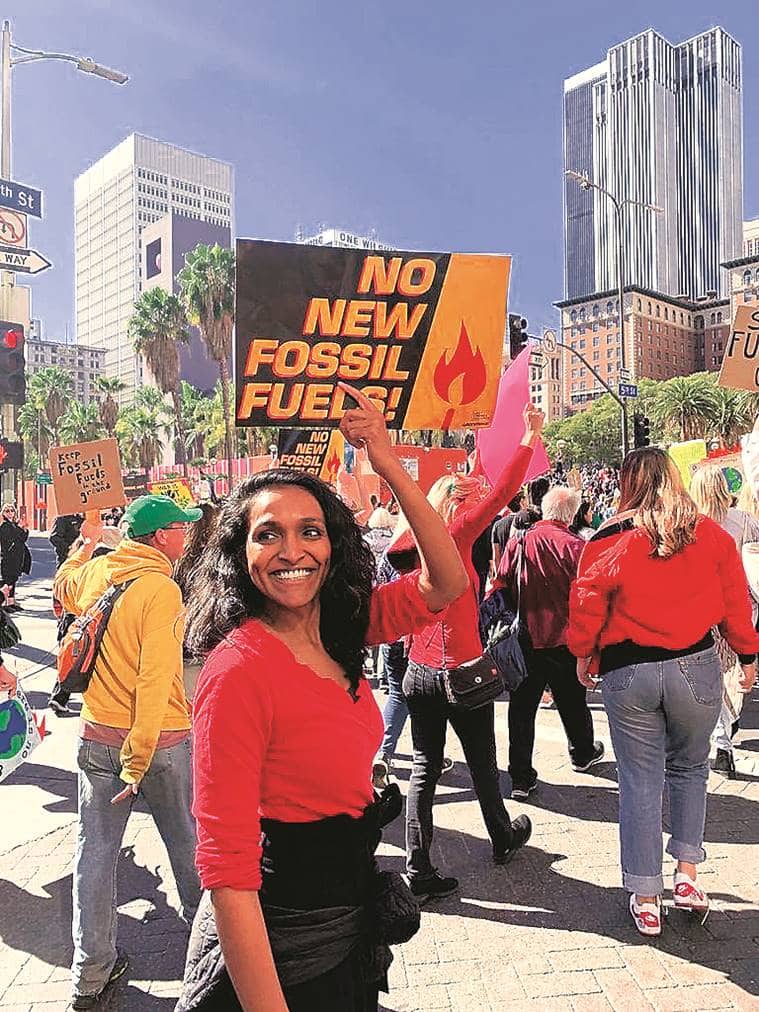 Did being an ‘outsider’ in politics work to your advantage?

In some ways, I was lucky to be ignorant of the way things are supposed to be done. Had I known more about what people say it takes to win a race, I may not have run against an incumbent, nor would I have run against someone so stunningly well-funded.

What were the unpredictable moments of your campaign?

There were so many! After having built an incredibly effective door-to-door campaign operation in the primary, we’d to completely transform our approach, during the pandemic, for the general election. For example, to make up for not being able to have one-on-one conversations, we had volunteers write postcards (around 60,000) and had people drop off bags of literature to their neighbours with handwritten Post-it notes on them.

My favourite was when my then 4-year-old twins, at events during the primary, would interrupt me during my speech to ask for snacks, or run in circles around me as I was speaking. I had to learn how to stay focused.

In the hugely polarised US election, where were the intersections among voters?

In a city like LA, almost everyone is a Democrat, so the differences between politicians do not fall along traditional party lines. To me, the differences between voters fell along two major axes — between renters, who faced more housing insecurity and were very concerned about rising rents and housing supply, and homeowners, who had different concerns. But everyone cared deeply about homelessness, traffic, and air quality, and wanted more effective government.

Your fight with opponent David Ryu has been called the ‘future of LA politics’.

This was the first election when the municipal elections were moved to be held at the same time as the federal elections. In our district, because of our extensive voter outreach, voter turnout really exploded, far more than other city council districts — from 24,000 in the last general election for this seat to more than 130,000 voters. It shows that the broader electorate in LA is very progressive. Elected officials and future candidates will have to reckon with this new, progressive electorate.

You defeated a sitting council member —a first in LA. What helped people make that choice?

On the issues that matter the most to people, the city has been moving in the wrong direction. As a result, making the case for change was easier than before. I was also running at a time that saw a profound interest in local politics because of the protests against Floyd’s murder. Also, LA has a very unique neighbourhood structure. It has sometimes been described as a set of smaller cities and towns rather than as one large city. One of the biggest challenges was to create a real sense of local community and connection.

Many more people were looking to the local government to push for change and were receptive to a candidate who spoke more directly on these issues. I believe our campaign was able to change or add to the way in which many residents interacted with the city.

What awaits as you take office?

We are facing another COVID-19 surge. My immediate focus will be on ensuring that residents and small businesses have the resources they need to weather this surge.

📣 The Indian Express is now on Telegram. Click here to join our channel (@indianexpress) and stay updated with the latest headlines

For all the latest Eye News, download Indian Express App.

adminhttp://news.siterubix.com
Previous articleArkansas politics not as much fun as they used to be
Next articleIndians learn tough lessons as McDermott and Wildermuth hit hundreds

The worst of the coronavirus pandemic may be on the horizon for the US, with a possible surge in cases after the Christmas...
Read more
Politics

Prime Minister Modi attacked the ongoing farmers’ movement directly when he said that it is an event management exercise, at a government event...
Read more
Politics

Jon Ossoff Got Some Breaks in Politics. And He Made a Few of His Own.

Jon Ossoff was 16 years old when he wrote a letter to John Lewis, the Georgia congressman and civil rights pioneer, that led...
Read more
Politics

A popular Bondi restaurant has apologised to an Italian backpacker for “embarrassing and offending” the woman over her choice of outfit.North Bondi Fish...
Read more

This is what happens to your body when you stop exercising

After a lot of effort, you finally started exercising, but one fine day you got busy and felt too lazy to...
Read more

David Graham, or “Farmer Dave”, as many may remember him as, hit our screens back in 2006 when he appeared on the reality...
Read more

The worst of the coronavirus pandemic may be on the horizon for the US, with a possible surge in cases after the Christmas...
Read more

Dire forecast for end of the year

Much of Australia can expect a wet end to the year, with thunder and rain storms predicted across the eastern half of the...
Read more

A coffee break in the United States and elsewhere is a short rest period granted to employees in business and industry. An afternoon coffee break, or afternoon tea, often occurs as well.

Legends face off ahead of blockbuster

Mike Tyson and Roy Jones Jr. have stepped on the scales and officially weighed in ahead of their fight on Sunday.Watch Mike Tyson...
Read more
Travel

Some Australians living overseas are determined to get home for Christmas despite ongoing travel bans, hefty quarantine costs and threats of being bumped...
Read more
Health & fitness