Explained: Politics of BJP’s anger against the Gupkar alliance and Congress

Ever since the Congress party initiated talks with the People’s Alliance for Gupkar Declaration (PAGD) for the November-December District Development Council (DDC) elections, the BJP has been on a tirade against the leaders of what it calls the “Gupkar Gang”.

The party held two press conferences on a single day, which was followed by Union Home Minister Amit Shah’s diatribe on Twitter, after which almost every senior BJP leader, including Chief Ministers, made it a point to attack the leaders of National Conference (NC), People’s Democratic Party (PDP) and Congress.

Why does the Gupkar alliance make the BJP angry and irritated?

The answer lies in the ruling party’s plans for Jammu and Kashmir, which was bifurcated into two Union Territories (UTs) after its special status under Article 370 was abrogated in August last year.

How did BJP envisage J&K after the abrogation of Article 370?

BJP leaders, including Prime Minister Narendra Modi and Home Minister Amit Shah, the main architect of the constitutional changes of August 2019, had talked about the election process in the two UTs of Jammu and Kashmir and Ladakh, which the BJP maintained would complete the process of “normalisation” of the region.

In his Independence Day address this year, Prime Minister Modi had said that “there will be elections” as soon as the delimitation process is complete, so that J&K has its own government to take forward the work of development with “renewed vigour”.

In the calculation of the BJP, an election process with the participation of a considerable portion of the population would put the seal of democratic approval on the revocation of special status.

Editorial | If Home Minister has to resort to same old rhetoric against J&K’s mainstream leaders, what’s been achieved over past year? 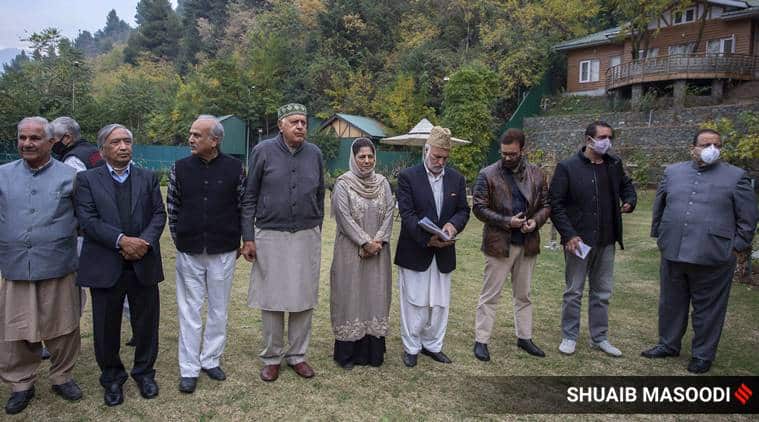 “It would be seen as a huge success for both Modi and Shah. No one from inside or outside the country would any longer by able to question those events,” said a senior BJP leader who has been involved in the party’s affairs in erstwhile state.

In order to be able to claim that “normalisation” has been accomplished, the BJP wants to demonstrate “three-tier democratisation”. Indeed, when the Union Cabinet approved the adoption of the Jammu and Kashmir Panchayati Raj Act, 1989 on October 21 this year, Union Minister Prakash Javadekar said it would “help establish all the three tiers of grass root-level democracy in Jammu and Kashmir like in other parts of the country”.

How did the plan to hold the DDC elections come about?

Last month, when it cleared the Union Territory of Jammu and Kashmir Reorganisation (Adaptation of State Laws) Fourth Order, 2020, to notify amendments in the Jammu and Kashmir Panchayati Raj Act, 1989, in order to hold direct elections for DDCs, the government said it was a move to bring grassroots democracy.

An election exercise that gives most of the population a chance to vote would be a mini Assembly election. The reluctance of the erstwhile state parties in participating in the process had made the BJP confident that the winners in the election could be transformed into the representatives of the party or the central government. (Anti-defection law does not apply to the winning candidates and the BJP always has the option of roping them in.) The party’s assessment has been that the newly elected representatives would gradually make the established party leaders irrelevant.

An election exercise that gives most of the population a chance to vote would be a mini Assembly election — and non-participation by political parties and leaders of the erstwhile state would significantly erode their relevance.

Opinion | Tavleen Singh writes: Is it any wonder that in Modi’s India dissidence is being seen as sedition? 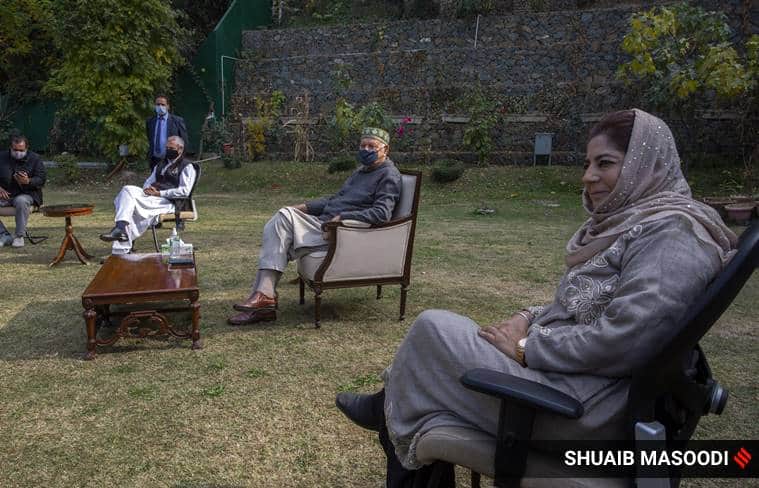 Elections to the panchayat and blocks have already taken place without the regional parties participating. Once constituted, the DDCs will have jurisdiction over districts, besides the portions that are part of a municipality or municipal corporation.

“Once the DDC polls are over, every citizen in J&K would have had the chance to take part in the election process,” a BJP leader said.

Party sources said this move was not known to many of those who were involved in the process since the beginning. According to them, the decision to hold direct elections for DDCs was taken by Shah with the approval of the Prime Minister.

These sources also said it was the PM who handpicked former Union Minister Manoj Sinha, who has the reputation of being able to implement plans without upsetting many, to oversee the process.

What is the BJP’s longer-term political calculation?

The elections will take place across J&K in eight phases from November 28 to December 22. Each district is divided into 14 territorial constituencies to elect the Chairperson and Vice Chairperson of the Council.

“This is a direct election that gives a chance to most citizens in J&K to vote. The Chairpersons will be equivalent to MLAs. The Centre will provide funds directly to these elected representatives, and they will become the go-to people for everything in the district, which will gradually make the already existing local leadership irrelevant,” the senior BJP leader said. 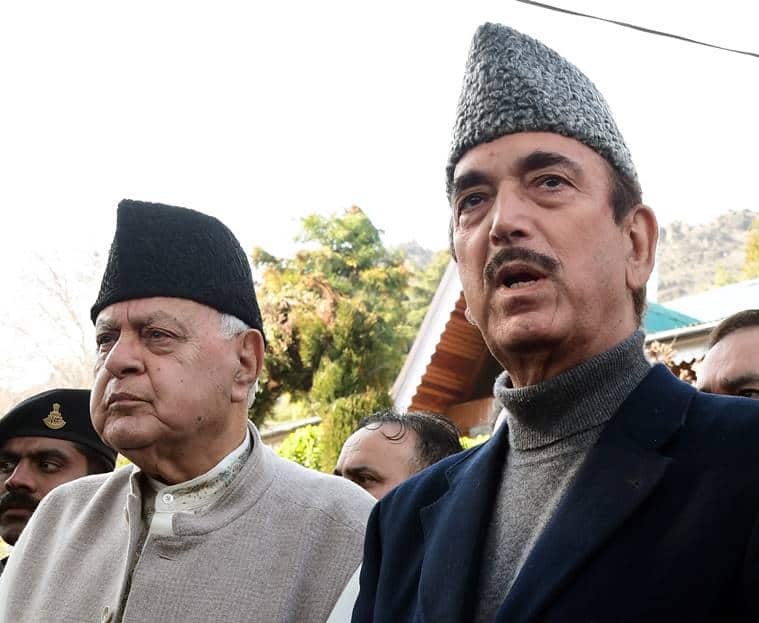 This, the senior leader said, was expected to weaken the clamour for Assembly elections. “The BJP can say this election process has reinforced our decisions taken for the state. So an election to the proposed Assembly for the UT can wait,” he said. 📣 Click to follow Express Explained on Telegram

So, what went wrong?

The BJP, which does not have a strong support base in Kashmir, has its eyes on the smaller parties and “vulnerable” candidates from the state parties. BJP leaders said the party, as well as “people on behalf of the party”, are in touch with many who have filed nominations to contest the DDC elections. Since these elections are not contested on party symbols, provisions of the anti-defection law are not relevant.

The BJP has also kept its options open on the Altaf Bukhari-led Jammu and Kashmir Apni Party which has fielded candidates. “Bukhari, being a businessman has the resources to ensure victory for some of his candidates. The BJP has kept open the option of joining hands with him after the election process,” a source in the party said. Bukhari has taken public jibes at the PAGD’s decision to contest.

But the unexpected decision of the Gupkar alliance to field candidates has introduced a new element in the BJP’s calculations. Besides the two main regional parties, National Conference (NC) and PDP, the alliance has CPI, CPM and four other smaller parties as its constituents.

“They are fighting together and if the Congress also joins them, the alliance will definitely take a large chunk of seats and make things difficult for the BJP post-election,” the BJP source said. The party’s hope of having a “new leadership” in Kashmir could be scuttled if the PAGD wins a large number of seats.

Why has Congress become the target for BJP leaders?

The attacks on Congress by leader after leader in the BJP has two aims.

One, to confuse the Congress leadership and make them unsure about joining hands with the state parties.

Two, the repeated questioning of the nationalist credentials of the Congress has been at the top of the party’s agenda for a long time now.

It is part of the BJP’s larger plan at the national level — to repeat accusations of being anti-national against the Congress, its leaders, and the leaders of parties that are friendly to it, with the aim of discrediting the Opposition ahead of the Assembly elections next year.

Don’t miss from Explained | Quixplained: Why are trains not running in Punjab

📣 The Indian Express is now on Telegram. Click here to join our channel (@indianexpress) and stay updated with the latest headlines

For all the latest Explained News, download Indian Express App.

The worst of the coronavirus pandemic may be on the horizon for the US, with a possible surge in cases after the Christmas...
Read more
Politics

Prime Minister Modi attacked the ongoing farmers’ movement directly when he said that it is an event management exercise, at a government event...
Read more
Politics

Jon Ossoff Got Some Breaks in Politics. And He Made a Few of His Own.

Jon Ossoff was 16 years old when he wrote a letter to John Lewis, the Georgia congressman and civil rights pioneer, that led...
Read more
Politics

A popular Bondi restaurant has apologised to an Italian backpacker for “embarrassing and offending” the woman over her choice of outfit.North Bondi Fish...
Read more

This is what happens to your body when you stop exercising

After a lot of effort, you finally started exercising, but one fine day you got busy and felt too lazy to...
Read more

David Graham, or “Farmer Dave”, as many may remember him as, hit our screens back in 2006 when he appeared on the reality...
Read more

The worst of the coronavirus pandemic may be on the horizon for the US, with a possible surge in cases after the Christmas...
Read more

Dire forecast for end of the year

Much of Australia can expect a wet end to the year, with thunder and rain storms predicted across the eastern half of the...
Read more

A coffee break in the United States and elsewhere is a short rest period granted to employees in business and industry. An afternoon coffee break, or afternoon tea, often occurs as well.

With two recent incidents, the government is scampering to do damage control to Karnataka’s image as an industry-friendly state.Within days of the violence...
Read more
Travel

Where UAE residents can travel without having to quarantine on arrival

Book an end-of-year escape to one of these quarantine-free destinations…With a five-day weekend for UAE National Day just around the corner, you might...
Read more